Welcome to my garden

Allow me to stray away from history for just a moment, long enough for me to recall a memorable moment I observed recently.  On Spring Bank Holiday this year, the vagaries of the English weather decreed that all day, the rain would fall and often heavily as strong showers.  Sitting with my meagre breakfast of Weetabix and a cup of sweet tea, I was bemoaning the fact that many people had likely planned for a wonderful trip out this day and especially the many children who, on a bank holiday, were to be denied access to fun places to which they had hoped to visit.
As I sat looking through my kitchen window with no such plans made for myself, I was surprised to see a tiny wren, perched atop the bird table outside in the rain and seemingly impervious to the prevailing conditions, she – and I am guessing here that she was the mother –  was carrying a large amount of material, moss from the nearby stones, in her beak.  Balancing her tricky load and with no obvious fear of the wind or rain, she was to flit to my ivy-clad wall about six feet distant.  As I watched, I saw her wait awhile until a second wren emerged from beneath her to fly off busily and out of my view. 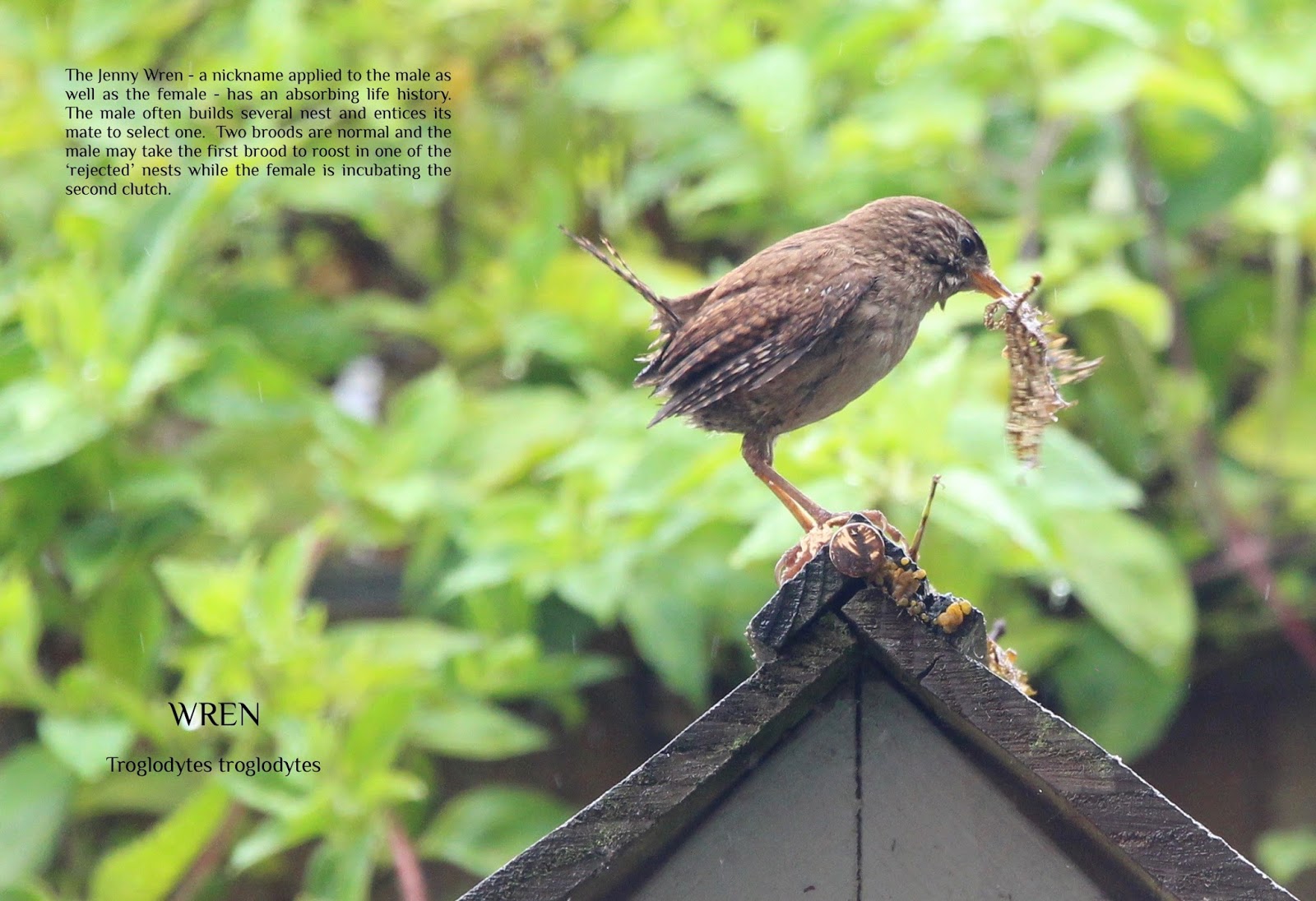 So it wasn’t rocket science for me to realise that the pair had chosen my garden in which to construct a nest to raise their new family.  The tiny ‘jenny’ wren, one of the very smallest birds in Britain was one of my very favourites  and thus I was pleased me no end at the thought.  Although said to be one of the most numerous birds, they are not too common about these parts and those that are about, tend to be quite shy as they flit about the lower branches of the bushes with their highly cocked tails, or even scuttle amongst the leaves on the ground searching for grubs. I have often even mistaken one at the back of the bushes for a small mouse foraging, before now. 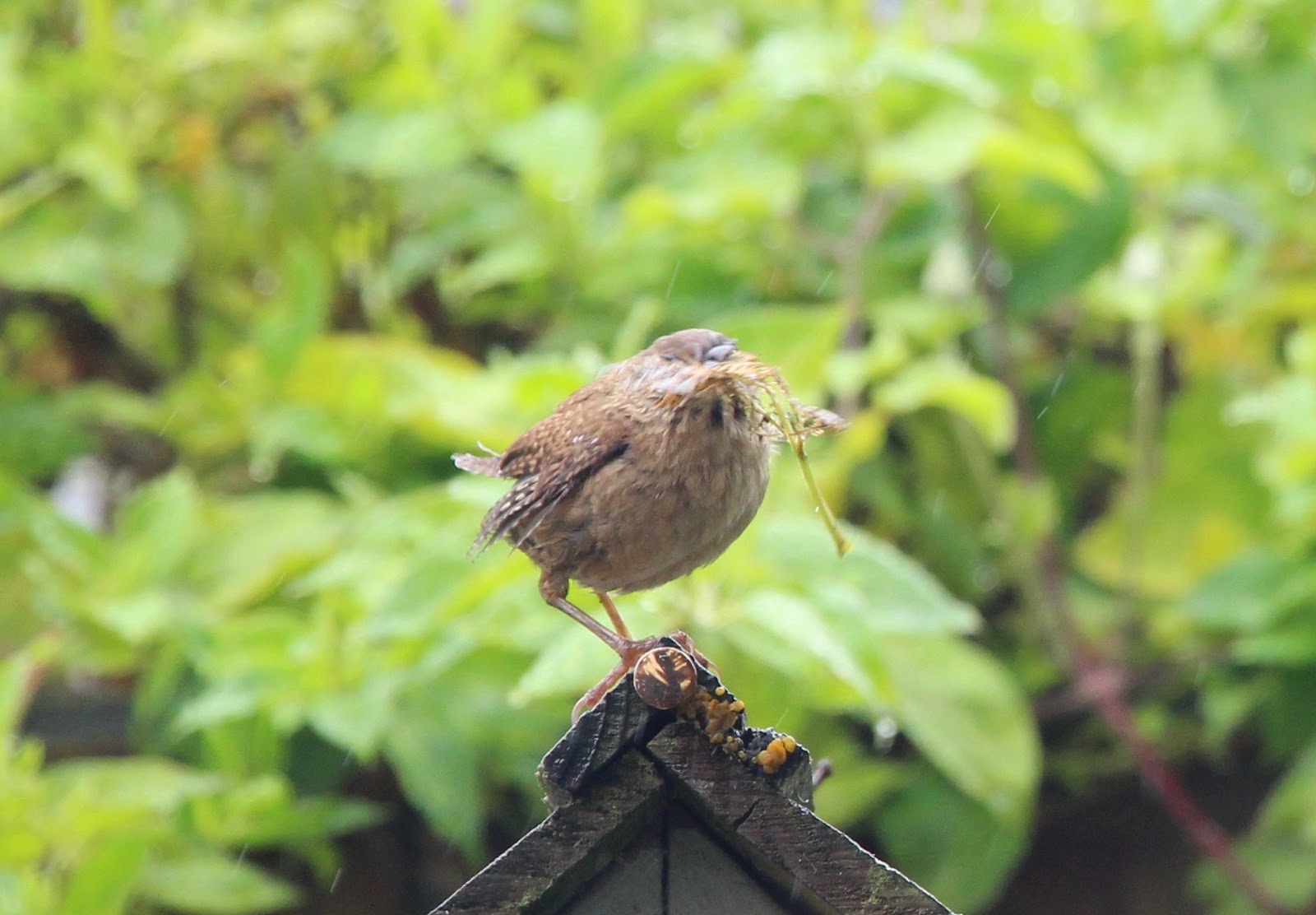 But this was certainly no mouse and it was plain to see that she was fetching beak-fulls of dried moss and leaves, returning to the new location at least every 15 seconds; I was not able to ascertain that both birds were actually involved in the construction work as both male and female are known to be alike.

My instant reaction was to attempt to photograph the scene, but realised that my smart-phone would not be able to cope with the job from my location in the prevailing conditions, through a window and in the pouring rain, so that this was to be a job for my DSLR.   But whatever the result of my photography,  I was extra pleased that these two little wrens had chosen my garden to raise their family.  They worked without break for about three hours, finishing off by making a false entrance to deter would be intruders and produced a beautiful, neat home in which to spend her confinement and raise their chicks.

Sadly, disaster for the two little wrens was awaiting the end of their hard days work. In the afternoon, I was to return home and on checking the progress of the days big event, I was horrified to discover that their new home had been destroyed, the evidence of which lay on the ground as I found that the moss and feathers had been roughly torn out of the Ivy branches and were all scattered about. Although I never did know what had occurred that day, I have always assumed that the awful destruction had been caused by other birds.

I wonder if they built a new one nearby, or did they build another that day and chose it? Odd creatures sometimes, birds!

This site uses Akismet to reduce spam. Learn how your comment data is processed.